“Bet it’s haunted,” I said, watching the frostbitten trees pass us by through the window.

“It’s not haunted.” Mom kept her eyes on the road, which was slippery from ice. “Honestly, the worst thing we might have to deal with is faulty plumbing.”

“I’d take haunted over faulty plumbing any day,” I said. “It’s a spooky house outside of town. It better be haunted.”

I was fourteen—young enough to still be handcuffed to my mother and I was as restless a prisoner as they came. I’d grown up in Oslo, and I missed it, but I figured we wouldn’t stay in the new town long. It was only a matter of time before Mummy Dearest met someone new in town and things went the way they always did. I was more than ready to hate the new house, purely out of spite.

But just as the sun began to set, we arrived and I fell in love. Our new house was small and rickety, with an ever-present dourness surrounding it. The front door creaked at our touch, opening to reveal a dimly-lit den riddled with cobwebs and dust. There was minimal furniture, but the wooden walls had a rich, aged texture that suggested a storied past.

A glass door led me out to the back yard, where I found a frozen lake bordered by a wall of trees—the gateway to a great and dismal forest. Just before the lake rested a large oak tree, from which hung a swing created from frayed rope and an ancient plank of wood. It blew back and forth, seemingly from the wind, but as I stepped closer I noticed its arc had an even rhythm, as though an invisible child swung in it. I reached out, strangely compelled to confirm the reality of the thing. But just as my fingers were within touching distance, the swing ceased to move, even though I felt the wind blowing through my hair. 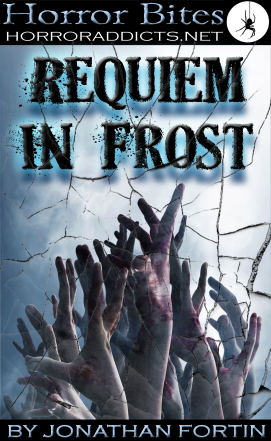 “Yup,” I said to Mom, after going back inside. “This place is definitely haunted.”

She scowled at me. “Come on, Ingrid. I got it for a really good price.”

“Ingrid, please. There’s no such thing as—”

A loud bang, like that of a snare drum, shook the walls around us. It sounded like it had resonated from within the house.

Mom jumped. I shrugged and went to check out the bathroom.

At midnight, we awoke to great guttural shrieks, as if from lips pressed against the walls—the emissions of a man enduring the worst tortures imaginable. But no tortured person would have the strength to scream that loudly.

I always have trouble sleeping in a new bed for the first time, and I’d only just fallen asleep when the shrieking began. Rather than being scared, I was merely annoyed from having my hard-won sleep interrupted. I tried to muffle my ears with my pillow, but it didn’t work. Hell, after a moment, I realized I could understand some of the words.

Ruptures uncover the doomcloud beneath

The darkness is calling untold from within

From caverns between your honor and sin!”

I frowned. Were we dealing with the ghost of a melodramatic poet?

“Ingrid!” Mom tore open my bedroom door. “Are you all right?”

Jonathan Fortin is the author of Lilitu: The Memoirs of a Succubus (coming December 2019 from Crystal Lake Publishing) and Nightmarescape (Mocha Memoirs Press). An unashamed lover of spooky Gothic stories, Jonathan was named the “Next Great Horror Writer” in 2017 by HorrorAddicts.net. He attended the Clarion Writing Program in 2012, one year after graduating summa cum laude from San Francisco State University’s Creative Writing program. When not writing, Jonathan enjoys voice acting, dressing like a Victorian gentleman, and indulging in all things odd and macabre in the San Francisco Bay Area. You can follow him online at www.jonathanfortin.com or on Twitter @Jonathan_Fortin.

Naching T. Kassa is a wife, mother, and Horror writer. She’s created short stories, novellas, poems, and co-created three children. She lives in Eastern Washington State with Dan Kassa, her husband and biggest supporter. Naching is a proud member of the Horror Writers Association, Head of Publishing and Interviewer for Horroraddicts.net, and an Assistant at Crystal Lake Publishing. View all posts by Naching T. Kassa